When I first began exploring Tarot Cards, I decided to have a reading from a friend who was using the Rider-Waite-Smith(RWS) deck.  I got the Ten of Cups as my final outcome card in a Celtic Cross spread. 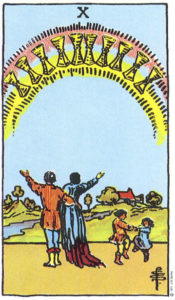 She said that this was a great card and things were going to be fabulous in the future.  I saw the beautiful cups and the rainbow and thought “It is a lovely scene, but what do those children dancing in the bottom mean?  I don’t have kids and just got divorced.”  I wondered what it could mean.  What had Pamela Coleman Smith drawn and what message was being conveyed?  Why was it that way?  You can’t see the couples’ faces, only the “happy” children dancing up a storm under a rainbow full of cups.  In the book that accompanies the Original Rider Waite Tarot Deck, The Pictorial Key to the Tarot, Arthur E. Waite stated that the Ten of Cups shows an “appearance of cups in a rainbow; it is contemplated in wonder and ecstasy by a man and woman, evidently husband and wife.”  But I was not sure how this applied to me and my situation.  I started to look at other decks and how other Tarot artists viewed this card.

I started with the Ten of Cups in the Voyager Tarot deck by James Wanless, which shows the Ten as a golden cup surrounded by flowers. The cup is a golden lion with flowers coming out of it and all the flowers are in full bloom. It appears to be abundance in all it’s glory. 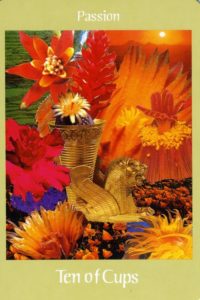 In the Halloween Tarot, the Ten of Cups is depicted as the Ten of Ghosts and all the Ghosts are strung around the card as decorations at a party. The full moon is shining down on the couple in the card as well as the two little children who seem to be dancing in the bottom corner of the card. 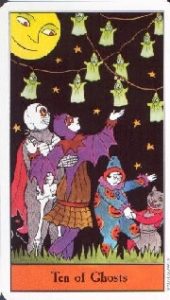 In the Archaeon Tarot, the Ten of Cups appears as a Geisha standing by a darkened wood with ten cups arranged on the ground before her. Her demeanor seems pensive and the woods foreboding. 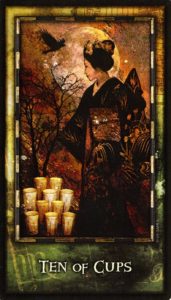 It became clear to me that every artist had taken a differing view of ways to express this last card of the Cups suit. But how should one read this overflow of emotions?

As I continued my studies, I found out that Tens are the extreme of the Minor Arcana.  They represent as far in the suit as one can go and this can be both good and bad. This water card is at the end of the cup pips. It represents having been through all the other places and it is now at the end of it’s journey.  It is the final cups card before you go into the court or cycle back through the pips. It stands ready to be the answer to all and yet the last question in the emotion cards.  Cups are the element of water with it’s ebb and flow.  When looking at the other pip cup cards, the Ten stands out as it doesn’t appear to have water in its cups in the RWS deck. It is encompassed in the rainbow after the flood.  Could it suggest that one has to survive the floods of emotions to reach one’s rainbow or emotional dreams? Traditionally, the Ten of Cups is seen as the overflowing of emotions or having achieved the end of the journey in the Cups.  But when it is laid in different positions in a spread, it is interesting to see how the position effects the meaning of this card. If one focuses on the location of the card in the spread instead of just using the main meaning of the card as the deciding factor of its message, the reader can really expand what this card could be conveying to the querant. In other words, try applying the meaning of the location in the spread to give perspective on the possibly meaning of the card in that location. For example, when it appears in the hopes/fear position in a Celtic Cross spread, how often does a reader skim it as “Oh see you hope for a family and complete joy“?  Why not also consider it as fear of never having a family or kids?  Or what about the obsession with finding the “perfect mate and family” and not looking at how the querent can improve themselves to meet the lofty goals as promised by the Ten of Cups? What other meanings could be seen here? What if you hate rainbows? It could be seen as no more rain, but it could also be seen as no more water to help things grow.

In the different positions in the Celtic Cross spread, one might want to add that position meaning to the wonder of abundance in the Ten of Cups.  Another example is using a 3 card spread of Past, Present, and Future. As the Ten of Cups moves through each position, how can it change how it is viewed? When it appears in the Past position, it can imply having a good foundation to have built upon. When in the Present position, it could  imply having achieved your goals in your job or family life. Finally, when in the Future position it could be considered to represent a goal one is working towards or rejoicing the good time one has worked hard to achieve. Try it in a spread you have not used before and you can see even more depth to this card. Each spread position can effect how the reader can take the meanings of the Ten of Cups and express it for the querent.

Of course there could be a meaning of negativity one might need to consider for different querents.  Upon looking at the the Ten of Cups, one can’t see the faces of the two “adults” in the scene in the RWS card. The woman could be screaming, crying or weeping because she is being held captive by the man who has his arm around her waist.  He could be keeping her there as he points up to the sky saying “See, you are mine.  Even the heavens say it is so.”  The children could very well just be evil henchmen dancing as their master has captured the princess. It depends on the querent and what they see as well. Or perhaps this ‘ideal’ setting is exactly what the querent doesn’t want, having recently escaped a restrictive relationship or household and now is on their own; in this case it represents what they got away from.  It could be that they feel that everyone around then is telling they must get married and have children and that isn’t their ideal. The Ten of Cups can imply dependency; that only in partnership can ‘happiness’ be found. For some people, this is exactly what they should NOT be seeking at this point in their lives; someone with a co-dependency problem may see this card as vindication of their habits and self-harming nature. Again, it depends on who the reading is for and the question at hand. On the other hand, perhaps the Ten is a goal but hints that trust, partnership and occasionally letting someone else handle things is needed. Not exactly what a Type-A, dominant, control-freak wants to hear, but maybe what they need to hear. The Ten of Cups, like every card, can contain bitter and necessary truths under the guise of idyllic rainbows.

I have found that the meaning of the Ten of Cups -and all cards for that matter- changes with the position I find the card in, for every reading I do. When the Ten of Cups is in the beginning and it cross the first card, generally people are looking for the rainbow of their dreams. When it showed up in the past influences, it could be about letting go of old dreams that weren’t their own. When it comes up in the future influences, it is more about looking for their own view of happiness.  If it is in the hopes/ fears position it is sometimes the hope for a family and children.  It also represents the fear of never finding that ideal. Each reading brings on a new way to see the Ten of Cups.  And each placement is a correct way to view the Ten of Cups. It is what the querent needs it to be.  And the Ten of Cups, like the water it represents, ebbs and flows as it shows up in any reading.

10 thoughts on “Dark Side of the Ten Of Cups”